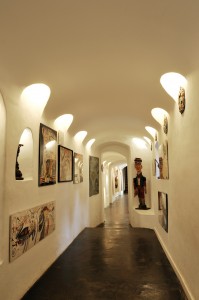 La Fabuloserie, which opened to 1983 the public , was devised and completed by the architect Alain Bourbonnais so as to shelter his collection of “hors-les-normes art”.

This appellation was suggested to Alain Bourbonnais by Jean Dubuffet, who wanted the name of “art brut” to be reserved for his own collection. It refers to out of the ordinary creations made by self-taught artists.
After opening a gallery, the Atelier Jacob, in Paris 1972 and 1982, l’Atelier Jacob, Alain Bourbonnais decided to create, with his wife Caroline, to create a museum he called “La Fabuloserie.”. It is composed of a “museum-house” in which over a thousand works are exhibited, ranging from the drawings by Yanko Domsic to the “bourrages” (characters made of stuffed body stockings) by Francis Marshall, and the amazing series of “Turbulents” by Alain Bourbonnais himself. An open-air museum, called “the inhabited garden”, displays the sculptures of “habitants-paysagistes” (inhabitants/landscape-artists): : Camille Vidal, Jules Damloup, , Jean Bertholle’s weather vanes and Petit Pierre with his astonishing “manège” (merry-go-round).